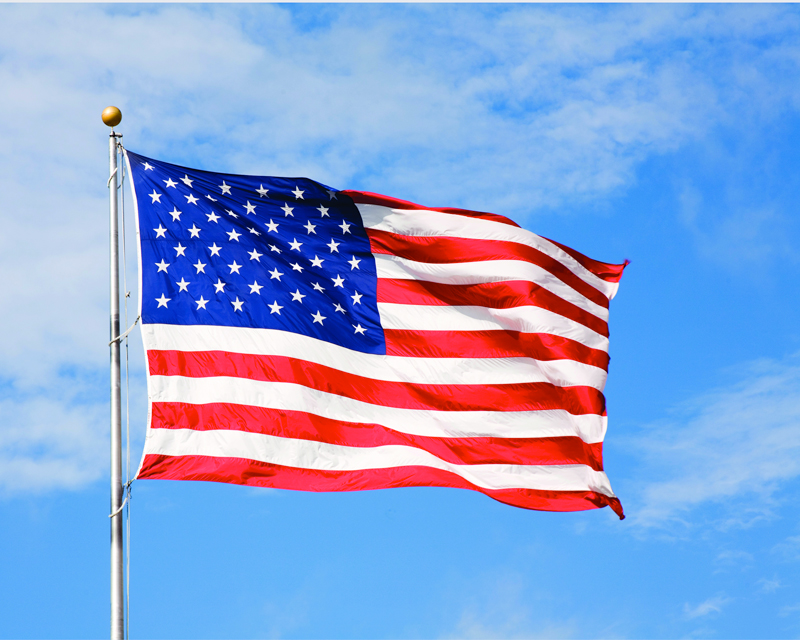 Ahead of National Flag Week, June 10-16, here are some common questions about the American flag.

Q: Can a flag that has been used to cover a casket be displayed after its original use?

A: There are no provisions in the Flag Code to suggest otherwise. It would be a fitting tribute to the memory of the deceased veteran and their service to a grateful nation if their casket flag were displayed.

Q: Can the United States flag be displayed on days when the weather is inclement?

A: The flag should not be displayed on days when the weather is inclement, except when an all-weather (nylon or other non-absorbent material) flag is displayed. However, most all flags are made of all-weather materials.

Q: What is the significance of displaying the flag at half staff?

A: This gesture is a sign to indicate the nation mourns the death of an individual(s), such as death of the president or former president, vice resident, supreme court justice, member of Congress, secretary of an executive or military department, etc. Only the President of the United States of America or the governor of the state may order the flag to be half-staffed. The honor and reverence accorded this solemn act is quickly becoming eroded by those individuals and agencies that display the flag at half-staff on inappropriate occasions without proper authority to do so.

Q: When the flag is not flown from a staff, how should it be displayed?

Q: How are unserviceable flags destroyed?

A: The Flag Code suggests that “when a flag has served its useful purpose, it should be destroyed, preferably by burning.” For individual citizens, this should be done discreetly so the act of destruction is not perceived as a protest or desecration. Many American Legion posts conduct Disposal of Unserviceable Flag Ceremonies on June 14, Flag Day. This ceremony creates a particularly dignified and solemn occasion for the retirement of unserviceable flags.

Q: Can the flag be washed or dry-cleaned?

A: Yes. There are no provisions of the Flag Code which prohibit such care. The decision to wash or dry-clean would be dependent on the material.

Q: Are you required to destroy the flag if it touches the ground?

A: Flag Code section 176b states that the flag should not touch anything beneath it such as the ground. This is stated to indicate that care should be exercised in the handling of the flag, to protect it from becoming soiled or damaged. You ARE NOT required to destroy the flag when this happens. As long as the flag remains suitable for display, even if washing or dry-cleaning (which is acceptable practice) is required, you may continue to display the flag as a symbol of our great country.

Q: What is the proper method for folding the flag?

A: The Flag Code does not require any specific method, however, there is a tradition that has developed over time. This method produces a triangular shaped form like that of a three corner hat with only the blue union showing.

Q: May a person other than a veteran have his/her casket draped with the flag of the United States?

A: Yes, although this honor is usually reserved for veterans or highly regarded state and national figures, the Flag Code does not prohibit this use.

Q: What is the significance of the gold fringe which we see on some American flags?

A: Records indicate that fringe was first used on the flag as early as 1835. It was not until 1895 it was officially added to the national flag for all regiments of the Army. For civilian use, fringe is not required as an integral part of the flag, nor can its use be said to constitute an unauthorized addition to the design prescribed by statute. It is considered that fringe is used as an honorable enrichment only.

Q: What is meant by the flag’s own right?

A: The “right” as the position of honor developed from the time when the “right hand” was the “weapon hand” or “point of danger.” The right hand, raised without a weapon, was a sign of peace. The right hand, to any observer, is the observer’s left. Therefore, as used in the Flag Code, the flag and/or blue field is displayed to the left of the observer, which is the flag’s “own right.”

Q: Is it proper to fly the flag of the United States at night?

A: The Flag Code states it is the universal custom to display the flag only from sunrise to sunset on buildings and on stationary flag staffs in the open. However, when a patriotic effect is desired, the flag may be displayed twenty-four hours a day if properly illuminated during the hours of darkness. The American Legion interprets ” proper illumination” as a light specifically placed to illuminate the flag (preferred) or having a light source sufficient to illuminate the flag so it is recognizable as such by the casual observer.

Q: What should be the position of the flag when displayed from a staff in a church, public auditorium or other public meeting place, whether indoors or outdoors, on platform, or on the floor at ground level?

A: When used on a speaker’s platform, the flag, if displayed flat, should be displayed above and behind the speaker. When displayed from a staff in a church, public auditorium or meeting place, the flag should hold the position of superior prominence, in advance of the audience, and in the position of honor at the clergyman’s or speaker’s right as he faces the audience. Prior to the Flag Code changes in 1976, the display procedure was somewhat different. Now the staffed flag should always be placed to the right of the speaker (observer’s left) without regard to a platform or floor level.

Q: What are the penalties for the physical desecration of the flag?

A: There are currently no penalties for the physical desecration of the flag. The American Legion and other members of the Citizens Flag Alliance continue working toward securing a constitutional amendment to protect the flag from physical desecration.