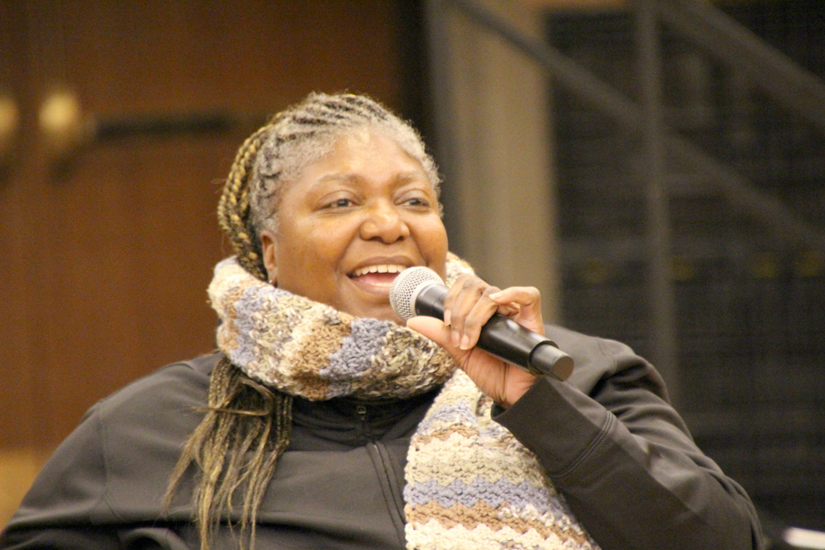 Angela Walker, a veteran and singer from Illinois, has been to the National Veterans Creative Arts Festival (NVCAF) for the past eight years. She first came because it was an honor to be invited. But she returns year after year because it gives her the confidence to live her life to the fullest.

“The thing I want most is to live,” Angela said. “I want to live my life as much as I possibly can. Just because you have some disabilities, it doesn’t mean you can’t use your abilities to conquer whatever you want to conquer.”

Angela’s time spent at the NVCAF has helped her grow more confident in her talents. She has received encouragement, wisdom, and guidance from peers and volunteers alike.

Not only does she love being able to explore her own talents, but she also loves sharing in the joy and inspiration she feels while performing alongside her peers and seeing them shine.

“I look at some of my fellow veterans and I know we are all going through something internally, dealing with our own struggles,” Angela said, “but there is something wonderful about people caring about each other and wanting to create something beautiful.”

Angela says it’s the military spirit to work together to get things done, and that mentality is in full gear as they learn and perfect their performances in such a short time. But she also knows it wouldn’t be possible without the support of the American Legion Auxiliary volunteers.

“It’s the little things, like having the patience to help you pin your gown or serve you hot soup after you’ve been singing in rehearsals all day,” Angela said.

She says the ALA truly give of themselves and do anything to help her and other veteran artists succeed.

“I really think the main ingredient is love – [ALA volunteers] love veterans, and to them, love is a verb. The ALA doesn’t just talk the talk. They walk the walk.”

She was so inspired by the kindness showed to her that she decided to become a member of the ALA and is now a dual member of The American Legion and the American Legion Auxiliary. As a member and a returning artist at the NVCAF, Angela hopes to help others in the same way she has been supported.

In 2019, over half of the veterans who attended the NVCAF were there for the first time, and Angela wanted to pay it forward by helping them feel at home.

“It’s exciting to see the veterans come in who have never been, who are a little anxious and just encourage them,” Angela said. “It gives us a chance to be little leaders, to be a part of the team helping, and also just watch them evolve to their full potential and see all of their talent. It’s a big deal.”

Help other deserving veterans reach their full potential through the arts by making a donation to the Veterans Creative Arts Festival Fund. Click here to get started.