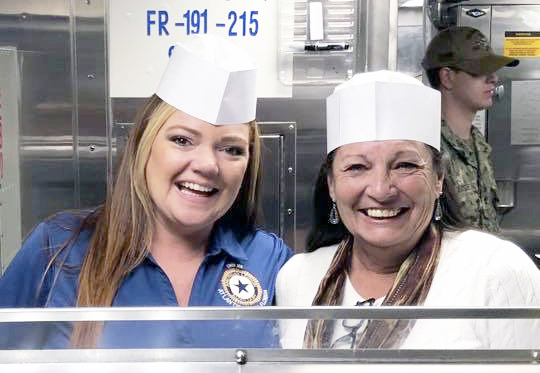 Florida ALA Unit 316 members Renee Pendlay (left) and Regina Fonda are all smiles as they get ready to serve holiday meals aboard the USS Roosevelt on Thanksgiving Day 2019 to on-duty servicemembers and military families.

Duty can call at any time for America’s military — even on Thanksgiving Day, when most of us sit down for feasts and spend quality time with family and friends. Missing out on holidays spent with their loved ones is just one of numerous sacrifices often made by many U.S. servicemembers and their families.

In appreciation for all they do, American Legion Auxiliary Unit 316 in Atlantic Beach, Fla., served a Thanksgiving Day meal for local military and some military families this year. The unit received permission to do so aboard the USS Roosevelt in Mayport. Approximately 80 meals were served to the ship’s sailors on duty for the holiday and to the military family members, who were allowed onboard for this special event. Also invited to the feast were servicemembers who were off duty for the holiday but had no place to go.

“We were just trying to think of a way we could give back, not only to our military, but also the families who make sacrifices because their loved ones are away protecting us and our freedom,” said ALA Unit 316 member Renee Pendlay, who organized the event. Assisting Pendlay with food service aboard the ship were Unit 316 members Regina Fonda, Jackie Lux, and Unit 316 President Annie Anderson; Post 316 Legionnaire and retired U.S. Navy Chief Petty Officer Chad Burg; ALA Department of Florida President Ann King-Smith and Department Leadership Chairman Dorothy Walsh; and Legion Department Sergeant-at-Arms Jeff Durden. 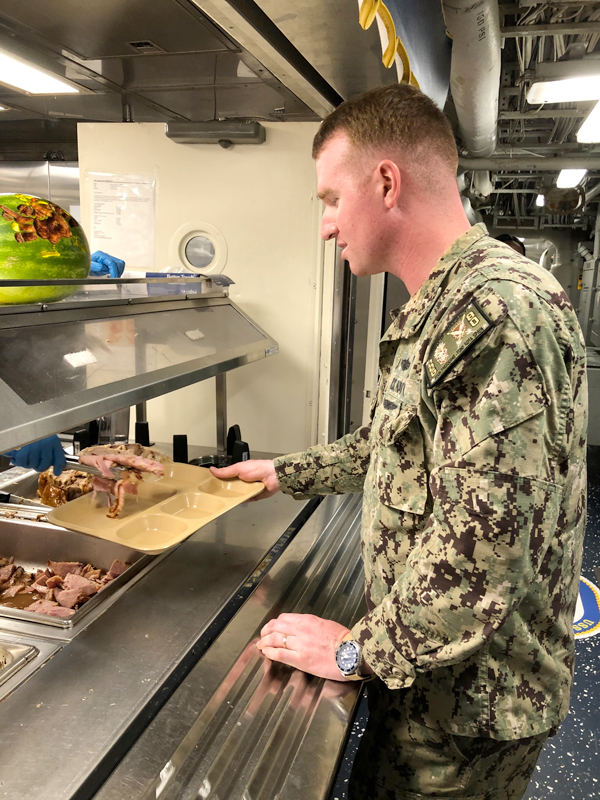 An on-duty servicemember aboard USS Roosevelt on Thanksgiving Day is being served his holiday meal by members of Florida ALA Unit 316 and others in the American Legion Family.

Unit 316 purchased the turkeys, which were cooked by Burg at the post and brought onto the ship, and supplied cakes and pies — some of which were made by Unit 316 members. The unit also purchased hams, which were prepared by the ship’s kitchen staff. The staff also cooked side dishes, such as corn on the cob, green bean casserole, dressing, gravy, and mashed potatoes, that the ship already had. The unit held a fundraiser to get the money to buy the food, Pendlay said.

Decorations, a mix of patriotic- and Thanksgiving-themed items made by students at Mayport Elementary School, were placed around the ship’s mess hall to create a festive atmosphere.

The USS Roosevelt’s on-duty servicemembers would’ve received a meal on Thanksgiving Day, even if Unit 316 didn’t serve its special meal. But Pendlay said the post home’s Legion Family wanted to contribute to the holiday meal and serve it to servicemembers and their families. The Legion Family members opted to eat their meals after they finished serving sailors and their relatives. The ALA members and Legionnaires also spent time with the military families they served.

“To have people come out here and say, ‘Hey, you’re not forgotten about’ and ‘We’re here to support you,’ and they take time out of their day — time from their families — to show support, it truly means a lot. It touches our sailors in the heart,” said U.S. Navy Culinary Specialist Chief Jason Cole of the USS Roosevelt. As a show of appreciation, Legion Family members aboard the ship on Thanksgiving Day were treated to a tour, Cole added.

Awaiting servicemembers at the end of the food line were thank-you cards, each containing messages of appreciation handwritten by numerous Legion Family members and others within the community.

“We were so proud to help serve Thanksgiving dinner to our military. We were able to shake hands, give hugs, and say thank-you for their service. This was a day all of us will never forget: a big salute to our military,” Anderson said.

Pendlay agreed with Anderson, adding: “We came aboard as strangers [to the servicemembers], and when we departed, we left feeling like family. It was a wonderful day, and I would love to do this again if given the opportunity.”

ALA Unit 316 in Atlantic Beach, Fla., extends a special thanks to U.S. Navy Commander Mathew Molmer for accepting the unit’s invitation to serve Thanksgiving dinner aboard the USS Roosevelt.