How our programs have changed, adapted over our 100-year history

Over its 100 years, the American Legion Auxiliary has supported veterans and the youth of the nation through its various programs. While the intent and heart of the programs may remain the same, they have had to change and adapt to keep up with what was going on in the world. 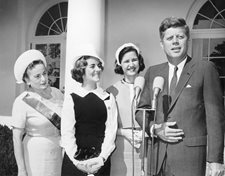 Originally established in 1937, American Legion Auxiliary Girls State was created to bring young women together in each state to learn more about the state and local government and to teach against the Nazi youth camps happening all around the U.S. After the end of World War II, members of the ALA started ALA Girls Nation in 1947 in an effort to copy the successful American Legion Boys Nation, then-named Boys Forum of National Government. Each year, two young women from each state are sent to ALA Girls Nation in Washington, D.C., to learn about the national government, conduct their own Senate, hold elections, and visit local monuments and museums.

Americanism can be seen throughout the history of the ALA, but in each decade, it may have meant something different. During WWII, everyone was proud of our soldiers and their fight overseas. They stood proudly with their hand over their hearts for the flag of our country, taught the youth what the flag meant, and were proud to be Americans. Over the last 50 years, this has not always been the case and it has been up to the ALA to find ways to continue to instill patriotism in our nation’s youth. The Americanism Essay Contest was created to teach students the value of patriotism and what it means to be Americans. Thousands of students participate in the program each year and help promote a lifelong respect of our flag and country. The Star Spangled Kids program has been around for a bit but was just recently moved to Americanism from Children & Youth. This initiative pushes to educate our youth on the history of the United States and the U.S. Constitution. 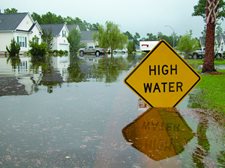 The Auxiliary Emergency Fund (AEF) is a program that was established in 1969 with a bequest from the estate of Helen Colby Small of Wisconsin. This program raises money to help ALA members when a disaster strikes, and members are eligible for assistance if they have been a member for three consecutive years. Member and non-member donations fuel this program and are vital to its continued support of our members.

The Children & Youth program recognizes youth in communities, provides grants to nonprofit organizations, and honors the children of deployed military members. This program was started in 1931 and was called the “Child Welfare” program. In 1970, members voted to change the name of the program to Children & Youth. The Youth Hero Award was added in 2002, and the Good Deed Award was added in 2004, recognizing youth under the age of 18 who go above and beyond to help someone out or those who display acts of bravery. Over 100 of these awards were given out in 2018 to thank those children who do what is right.

The Child Welfare Foundation was established in 1954 by The American Legion as a way to collect funds from those who wanted to donate to programs who helped children. The American Legion Auxiliary has a liaison to the Foundation who sits in on meetings and provides input. The first donations collected were able to provide three grants that totaled $22,500. Since then, $17 million has been awarded to organizations who assist the children of this country. The ‘Kids of Deployed are Heroes, Too’ initiative was started in 2013 to help military children feel special while their family member was deployed.

Community Service is also very important to ALA members. This program was started in 1926 and is a longstanding commitment to supporting the work of The American Legion. Community service events have changed over the years, but one thing that hasn’t is the willingness of ALA members to go above and beyond and help anywhere they can. Today, many ALA members assist in local stand downs for homeless veterans and welcome home and deployment events for military members. Stand downs were first held in 1988 when two Vietnam veterans saw the need in their community. Homeless veterans are given food, clothing, and shelter and many times, the local county veterans service officer is there to assist with benefits and job counseling. Welcome home and deployment events are a time that ALA members can show the military member and their family that they are there if they need anything. Many times, they may not be aware of who the ALA is and how they can help.

The Education program was one of the initial programs of the ALA after its inception. Both The American Legion and the ALA have worked with the National Education Association to assist with American Education Week. For years, ALA units “Give 10 to Education” in an effort to help their local teachers and schools. While scholarships from the ALA have been awarded for many years, this year a new scholarship specifically for Junior members who continue their membership after the age of 18 has been established. The ALA wants to show support to those Juniors who continue to support our mission and the organization.

In 1934, members of the ALA decided that members under the age of 18 should be separated into their own membership. The two classes that emerged from this Constitution change was senior and Junior. Past National President Lorena Hahn launched the Junior Activities Program in 1936, and by the next year, Junior membership had grown from 29,000 to 40,000 because of the activities the Juniors were doing. Today, Junior members and their work are still a large part of the organization. Juniors are able to earn patches for the work and activities that they are doing for the ALA programs.

The Legislative program works diligently with The American Legion every year to support their priorities and work for veterans. It wasn’t until 1962 when National Commander James Powers invited National President Mary Koger and the ALA to join them in Washington, D.C. for the Awareness Assembly. The ALA members joined the Legion for the first joint Legislative rally and have now continued this tradition each year for the Washington D.C. Conference. In 1980, the ALA created a Legislative Council to be able to reach all members of Congress within a 24 hour period. 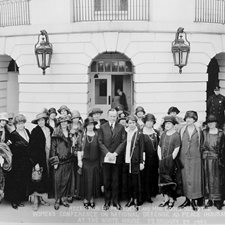 The National Security program has continued to work with our active-duty military and other organizations who support deployed servicemembers. Most important in this program is honoring our troops with Blue Star Banners and providing them for their families. Another part of the program is POW/MIA remembrance services to honor those who have still not made it home. The ALA supports recovery missions and groups who identify the remains of those found abroad. To keep up with the ever changing rules and regulations surrounding active-duty, reservists, and National Guard members, the ALA created its Military Readiness Action Guide in 2015 to better assist ALA members.

The Poppy program was established after WWI. Soldiers brought red poppies home from Europe in memory of those who were not able to make it home. Nationally recognized with the support of the ALA, National Poppy Day® is held the Friday before Memorial Day each May as a day to distribute poppies and collect donations for our Veterans Affairs & Rehabilitation program. For almost 100 years, 100% of the funds collected through poppy distribution has supported veterans, military, and their families. The ALA adopted the red poppy as its official memorial flower in 1920 and helped make it the memorial flower of The American Legion Family. While the crepe paper poppy is still the official flower of the ALA, today we have many new variations of the poppy as well. The Poppy Poster Contest is held each year to allow students to draw what they think the poppy stands for and helps them understand the meaning of the poppy from WWI and why we put crosses on deceased veterans’ graves. 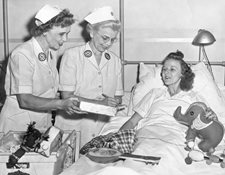 Veterans Affairs & Rehabilitation is the largest of the programs of the ALA and works to support the veterans who served our country and are now in need of assistance. Members spend hundreds and thousands of hours volunteering in the veterans homes and medical centers all over the nation. They also host Christmas Gift Shops which allow the veterans to pick out gifts of their choosing. The American Legion Family joined forces with other veteran service organizations and the U.S. Department of Veterans Affairs in 1946 to establish the Veterans Affairs Voluntary Services (VAVS) program. VAVS volunteers work with the ALA and other groups to support the veterans in the facilities. Past National President Kris West first established a working relationship with the VA and the National Veterans Creative Arts Festival in 2000. This relationship has continued, and the ALA has proudly become the co-presenter of the event.

Happy 100th birthday to the American Legion Auxiliary! Over the last 100 years, the mission of the ALA has remained the same — supporting veterans, military, and their families and our nation’s children and youth through our programs. #ALA100 #ALA100Celebration

This article was first published as an eBulletin.