Honoring the sacrifice of those who serve our country is one of the American Legion Auxiliary’s core values. American Legion Family members at Christopher Cobb Memorial Post 312 in Bradenton, Fla., took it upon themselves to bury two unclaimed veterans side-by-side with the military honors they deserved.

“The saying we have — ‘Leave no one behind’ — this is exactly what that means. Even in death, we do not leave our veterans behind … or this case, on a shelf and unclaimed,” said Sandy Gessler, unit president and dual member of Christopher Cobb Memorial Post 312. 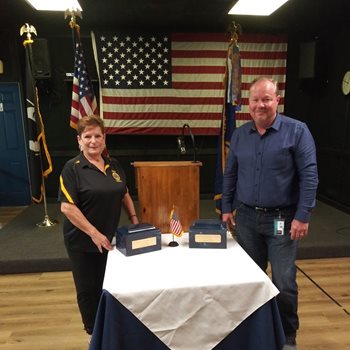 For the last few years, Gessler, a retired U.S. Army Veteran and 100% disabled, has been using her spare time to help identify gravestones of veterans in her surrounding community. The inspiration began after she visited a family member’s grave to pay her respects and noticed four veterans didn’t have their proper military headstones.

“That didn’t sit well with me, so I researched their information, worked with The American Legion and the cemetery, and then we had an honor service for them when their headstones were laid — and I’ve been doing it ever since,” she said.

Gessler has extended her generosity to help identify veterans’ gravestones in cemeteries throughout her county and district. She created a document that contains names and information of all the veterans buried in Manatee County. Some information that may be included is their branch of military service, military achievements, military awards, or other interesting facts.

Through her research and identifying process, Gessler has made connections with employees and owners of all the local cemeteries and funeral homes. Knowing the impact she has made in the community, Groover Funeral Home called Gessler, asking if she could help identify someone they believed to be a veteran. After months of being unclaimed on a shelf, and through Gessler’s hard work, 87-year-old Korean War veteran Pvt. Albert Hall would finally be laid to rest with military honors at the Sarasota National Cemetery.

“Albert’s story is heartbreaking — he had no immediate family, and he died alone,” said Gessler. “That’s why it’s so important that we have an Auxiliary and we have a post and that we know who in the community are veterans.”

Prior to Hall’s scheduled funeral service, Gessler received a call from another local funeral home, Brown & Sons, about the remains of a possible veteran. She discovered that the deceased was Vietnam veteran Manny Fluker, another resident of Manatee County. He was a kind and well-known homeless man whom everyone loved.

“These were our veterans,” Gessler said. “It was important to do even if we never met them personally.”

With help from the veteran community, the Bradenton American Legion Family decided to conduct side-by-side funeral services for Hall and Fluker at the Sarasota National Cemetery. They held the service at their post home and organized Legion Riders to escort with assistance from the police department. Gessler used local media to spread the word and worked with the two cemeteries to organize details for the service.

The whole community rallied behind Gessler and Post 312. Bradenton Mayor Gene Brown, who owns Brown & Sons Funeral Homes, donated two urns appreciating Hall and Fluker’s service. Downtown business owners plan to dedicate a bench in Fluker’s honor as well. The Manatee County Sheriff’s Office helped escort the veterans to the county line, with the Sarasota County Sheriff's Office escorting them the rest of the way to the ceremony.

“I was smiling one minute, and had tears another — all day long,” said Gessler. “It was one of those kinds of funerals where you were happy that they weren’t laid to rest alone and that they were laid to rest honorably. I loved that we were able to do that for them.”