This is why Rosemary Lancaster keeps her ALA membership.

“In my personal life, [Auxiliary membership] has helped me with speaking in front of crowds. I used to have such high anxiety that I would stammer through all my speaking. Now it’s so much smoother. I still have a way to go, but much better! It's also shown me more about giving.”

Lancaster has been an ALA member since she was 1 year old. She has several family members in the military. She was fairly active as a Junior member, and then on again/off again active during her 20s. For the last eight years or so, she has been fairly active. 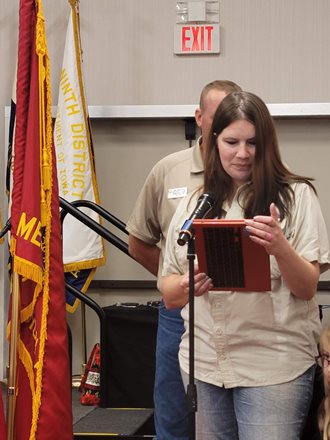 A major benefit of her ALA membership has given Lancaster confidence to speak in front of crowds.

“If you get me in front of 20 kids under the age of 15, I can talk and laugh and jump up and down, but the same amount of adults gives me some anxiety,” she said. “As I kept going and introducing myself to more people, I realized some of these people I’ve known since I was a Junior. Getting to know more members made it easier to speak in front of them because it’s groups of people I know.”

In 2019, she was installed as Iowa’s 5th District president.

“I did have to talk in some groups,” she recalled. “I was excited and nervous at the same time.”

During that time, the department president was her mentor, helping guide her and give her confidence in her public speaking skills. She has since been asked to serve on the Department of Iowa Membership Committee.

“I did more speaking at our department convention,” she said. “It was a lot easier than what I would have done like five years ago.”

It means a lot to Lancaster that the Auxiliary has played a part in helping with this life skill. 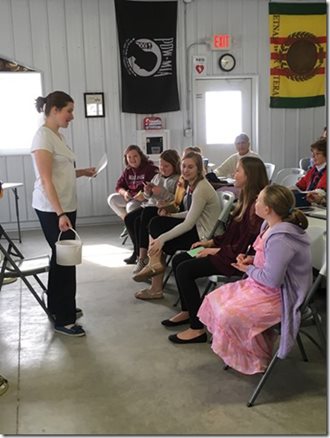 “It is definitely a life skill that is needed across the board, no matter where you work or what you do,” she said. “It means more than any words anyone could say, to be honest. As a Junior being shy, I wouldn’t have pictured me being here when I was 16, and now I’m here.”

Now being on the other side with more confidence in her public speaking, Lancaster offers advice to other members who may have anxiety about public speaking.

“It is not as scary as your mind sets it out to be,” she said. “Take deep breaths, and look above everybody’s heads. I don’t look at anybody unless I know them.”

Tell us why you renew your American Legion Auxiliary member dues every year. Email ALAMagazine@ALAforVeterans.org.