In 2013, Congress passed legislation for the National Museum of the American Indian (NMAI) to create a National Native American Veterans Memorial to give “all Americans the opportunity to learn of the proud and courageous tradition of service of Native Americans in the Armed Forces of the United States.” The memorial opened Nov. 11, 2020, in Washington, D.C., on the grounds of NMAI. 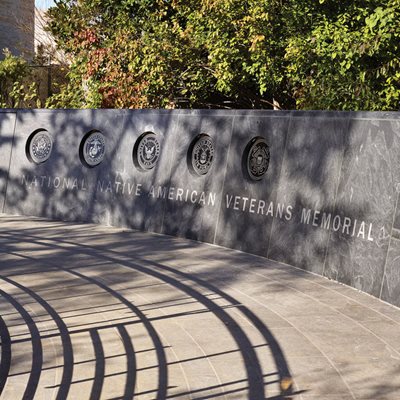 The memorial is described by the museum as “a welcoming space for gathering, reflection, healing, and remembrance, a place to honor the sacrifices and service of generations of Native veterans.” The memorial titled Warriors’ Circle of Honor was designed by Harvey Pratt, a member of the Cheyenne and Arapaho Tribes of Oklahoma. Pratt, a retired forensic artist, is a Marine Corps Vietnam veteran, and a Southern Cheyenne Peace Chief. The museum conducted an international competition to select the design for the memorial and was chosen through a juried, two-stage process.

A place to reflect and heal
Per the museum’s website, the memorial’s focal point is a large, vertical stainless-steel circle, sitting atop a low, carved stone drum form, at the center of a circular gathering space. Water flows continuously outward from the center of the drum, and a fire may be lit at the base of the steel circle on ceremonial occasions.

A circular seating area may be entered at the four cardinal directions from a surrounding walkway called the Path of Harmony, respecting different cultural practices regarding the appropriate direction from which to enter the central space. There are four vertical spears or lances where visitors may leave prayer ties, a traditional sacred buddle of tobacco used as an offering of gratitude. The seals of the five branches of the armed forces are on a nearby wall.

Symbolism of the design
The museum describes the meaning of the memorial as timeless and inclusive, honoring all Native American, Alaska Native, and Native Hawaiian veterans, as well as the families who support them. The circular design suggests a sacred circle, the cycles of time and life, and the movement of the stars and planets.
According to the museum, the circle is relevant to many Native American cultures in the shape of a drum and of circles for dance, storytelling, and prayer. The memorial incorporates the elements of fire, representing strength, courage, endurance, and comfort; water, signifying purification and prayer; earth, which provides people with all they need; and the wind that will carry the prayers and memories of visitors skyward.
The water pulsing across the surface of the drum is echoed by concentric rings in the stone of the walkways, suggesting the beat of a drum calling people to gather within the circle.

First landmark in D.C. to focus on contribution of American Indians
This is the first national landmark in Washington, D.C. to focus on the contributions of American Indians, Alaska Natives, and Native Hawaiians who served in the military. In a June 2018 press release on the memorial’s selection, NMAI wrote that Native Americans serve at a higher rate per capita than any other population group, and that few outside the military and American Indian Nations know that Native people have served in the U.S. armed forces since the American Revolution and continue to serve today.

See the museum in person
NMAI will host a dedication ceremony to honor Native veterans and their families on Veterans Day 2022.
Visiting the memorial: The outside memorial is open every day, 24 hours a day, and can be visited for free. Learn more at https://americanindian.si.edu.