Guest blog post by Tina Haggerty, Paid Up For Life member and president of ALA Unit 357, and district president for Lackawanna/Susquehanna County, Department of Pennsylvania

Remembering our nation’s prisoners of war and those missing in action is a constant part of The American Legion Family’s existence.

A chance encounter at a restaurant led to my post home getting a POW/MIA chair of honor.

As an ALA district president, I was heading to an American Legion Auxiliary meeting and stopped for breakfast at The Mess Hall. The place was decked out in military-related items. When leaving, I spotted the chair and asked the owner about it. 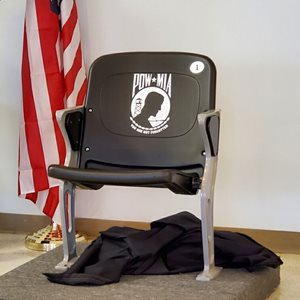 After explaining what it was, I knew right then and there I had to get a chair of honor for our post. I went to Hussey Seating’s website and emailed them a story of three of our own members who were POWs in World War II. Based on a recommendation by the restaurant owner, I also went to Patrick J. Hughes’s website, a national photographer with Rolling Thunder, an advocacy group that seeks to bring full accountability for prisoners of war and missing in action servicemembers of all U.S. wars.

My fellow Auxiliary members were very excited to get this chair for our post, saying this is the least we could do for our veterans, as they gave up so much for us. Normally the chair is $200 to purchase and another $200 for shipping, but if we advertised, Hussey Seating would waive the cost of the chair (which they did) and charge the unit only for shipping. The chair was delivered four weeks later.

After receiving the chair, the next step was figuring out where to put it in the post. We decided it would go next to the POW/MIA table. A platform for the chair needed built, as well as carpeting for the platform. The Auxiliary purchased a plaque, stanchion posts, velvet ropes, and new flag stands and flags.

We are so happy to have the chair here to keep the POW/MIAs alive in our hearts and in our thoughts and prayers.

I was able to get a former POW to agree to attend the event — Ralph Galati — but unfortunately, he came down with COVID-19 the day before the ceremony. His speech was still read, and in it, he mentioned how he and his fellow POWs were forbidden to discuss or perform the Pledge of Allegiance, national anthem, God Bless America, or hold church services as POWs. But those are the things that mattered the most, so regardless of the punishment or consequences, they proudly recited them.

Before the chair was officially unveiled, a somber roll call of the missing was conducted. For each war period, the number still unaccounted for was read aloud: 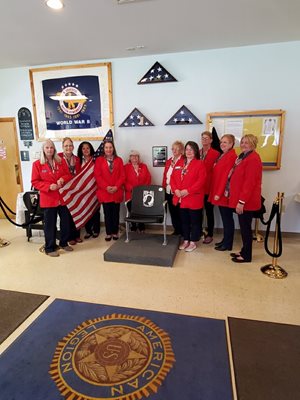 After this part of the ceremony, we unveiled the chair and presented a plaque to the Legion. The plaque reads, “You are not forgotten. Since World War II, more than 81,000 U.S. service personnel are unaccounted for.” There wasn’t a dry eye in the place.

Our American Legion Family is honored to have this chair permanently in our post home to remind anyone who passes by that there are still POWs/MIAs out there, and that we want them accounted for and returned home.

In addition to those Family and other community members who were there, we were lucky enough to have the event attended by local media, including newspapers and television, adding even more to the importance in our community of this POW/MIA chair of honor.

There will always be a seat for POWs/MIAs in our post home.