The Four Chaplains: Saving others with a selfless act

Imagine — a sinking ship and not enough life jackets. Would you give up your life jacket to save another? 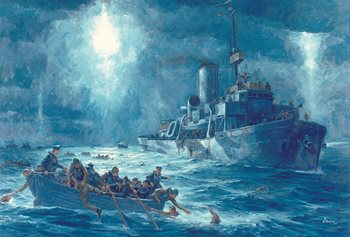 On a cold night in the North Atlantic on Feb. 3, 1943, not only did one man give up his life jacket, but three others joined him. This story may sound familiar to you: The Four Chaplains — Father John P. Washington, Rabbi Alexander D. Goode, the Rev. George L. Fox, and the Rev. Clark V. Poling — were on a sinking USAT Dorchester.

The Army transport was part of a convoy of three ships en route to an American base in Greenland. Before the ships could reach their destination, an officer on a German submarine noticed the convoy. Orders were given to fire, and the Dorchester was hit by a torpedo.

After the hit, the four chaplains attempted to bring calm to the chaos. They began by handing out life jackets, only to realize there were not enough. The men each removed their jackets to save four others.

As the ship was sinking, the four chaplains were seen standing on ship’s stern, arms locked as they prayed and sang hymns. Not only was it a sign of bravery, but the chaplains put aside their different faiths and prayed as one.

On that night, only 230 of the 902 on board survived. The ship was carrying servicemen, merchant seamen, and civilian workers.

The four chaplains were awarded the Distinguished Service Cross and Purple Heart posthumously. They could not be awarded the Medal of Honor because they didn’t meet the requirements. As a result, a posthumous special medal of heroism was awarded in 1961 by President Dwight D. Eisenhower. The Four Chaplains’ Medal was given and will never be given again.

The American Legion Family remembers these men and their sacrifices in an interfaith program each February. Four Chaplains Day is Feb. 3, and many post homes will host a ceremony on Four Chaplains Sunday, which is the first Sunday in February.

Chapel of the Four Chaplains

Dr. Daniel A. Poling, father of Lt. Clark Poling, decided there needed to be a shrine in memory of the four chaplains and their sacrifice. He imagined it as a place where all faiths could worship God.

This shrine became a reality in Philadelphia in the late 1940s. President Harry S. Truman dedicated the chapel in 1951.

The Chapel is no longer in its original location. In 2001, it moved to a third location, now at the site of a 1942 World War II Navy Chapel in Philadelphia.

The Chapel of the Four Chaplains serves as a place to tell their story and encourage selfless acts and interfaith cooperation.

Lt. Fox served as a medical corps assistant in World War I. Following the war, he was awarded the Silver Star, Purple Heart, and French Croix de Guerre. Fox returned home to Vermont and became a public accountant, married, and had two children. He later become a minister in Gilman, Vt. He was a member of Walter G. Moore American Legion Post 41 — now named Moore-Fox — and returned to active duty in 1942.

Lt. Goode was from Brooklyn, N.Y. He followed in his father’s footsteps and became a Rabbi and then earned a medical degree. He was married with four children. He applied to serve as a Navy chaplain in 1941 but was not accepted. Following the attack on Pearl Harbor, he applied as an Army chaplain and was accepted. ​

Lt. Poling was from Poughkeepsie, N.Y. He served as a pastor of First Reformed Church in Schenectady, N.Y. He was married and had two children, the second of which was born two months after the sinking of the Dorchester. His father served as a chaplain in World War I and decided to serve again after the United States entered World War II.

Lt. Washington was born in Newark, N.J., to Irish immigrants. He was ordained as a priest in 1935. Following the attack on Pearl Harbor, he was appointed as an Army chaplain.

ALA Past National Chaplain the Rev. Isadore Fox was the wife of Lt. George Fox. She served as the American Legion Auxiliary national chaplain in 1970-1971. Isadore also served the Department of Vermont as a chaplain for many years and as department president in 1960-1961. She wrote a book, The Immortal Chaplain, about her husband’s life. Isadore was an ALA member for more than 30 years and continued to serve until her passing in 1982.


The Four Chaplains Day program can be found in the American Legion Auxiliary Chaplains’ Prayer book in the MyAuxiliary section of www.ALAforVeterans.org.