What not to do in your Constitution & Bylaws 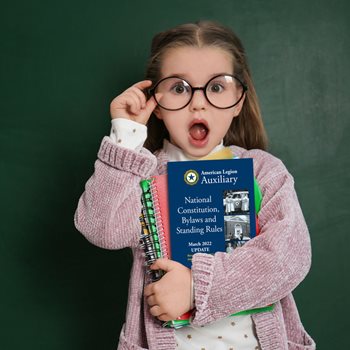 Not sure if you need to update your Constitution & Bylaws? Here are some examples of wording you may not want to have in your constitution, bylaws, and standing rules:

1. “Organization of women” or “the world’s largest women’s patriotic service organization.” As of 2019, the membership eligibility changed to “spouses.”

4. “Her” or “she” or “hostess” — there’s no easy fix here, so you have to go through it line by line and make it inclusive and gender neutral. We know. It’s a lot of work. We’re not asking you to do anything we didn’t do ourselves, though!

5. Rules on withdrawal of membership: “A unit member may withdraw providing her current dues are fully paid.” Nope. Get out your red pen and mark out the whole sentence. If a person does not pay dues, that’s their way of saying they no longer want to be a member. They do have to be current on their dues in order to transfer from one unit to another.

6. A rule requiring units to file their C&B with the department. Nope. Units are independent affiliates (see the national Standing Rule XI). Yes, departments can ask nicely with sugar on top, but should think twice if it’s in their bylaws — are you ready to assume risk for the unit, department?

7. A rule requiring lapsed members to pay “back dues” before reinstating into membership. Sorry, no! Also, you can’t discipline a member for not paying dues. If they no longer want to pay dues and belong to the organization, that is the decision of the member. If a member wants to keep “continuous years of membership,” the member may opt to pay all the back dues owed, but it’s not a requirement for reinstatement.

8. A department rule telling a unit how to discipline its members. That’s the unit’s job.

9. Empowering an officer with “executive powers.” That’s not really a thing. Spell out the duties of the office clearly. Check Robert’s Rules if you aren’t sure.

10. Having a rule that your unit will pay for any member to go to National Convention. True story. If it says it in your bylaws, you must do it.

11. A rule on who can run for national office. Those rules are determined by the National Convention body, not the unit or the department.

12. A rule that states a unit must follow a procedure “as stated in the Unit Guide.” What happens if that part of the Unit Guide no longer exists? Better to just state the rules in your document instead of referring to an outside document.

13. “Recommend.” A recommendation is not a rule.

14. “Chaplin.” Charlie Chaplin is not a member of the Auxiliary (wink!). But there is a “chaplain.”