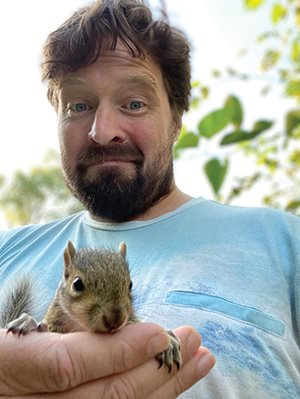 Matt Roth is an award-winning photojournalist with experience in both newspapers and magazines. He lives in the Baltimore area and specializes in portraits, conceptual photography, reportage, documentary, advertising, and creativity. He’s done work for The American Legion Family, including the cover of the February 2022 Auxiliary magazine.

What is your background in photography?
Well, my degree is in sociology from the University of Georgia (Go Dawgs!), and I definitely don’t have a mind for academia. So, I was going through a bit of a “What am I gonna do with my life” crisis. And I took the intro to photojournalism course. I was invited to take the other two courses, and I had the weirdest calm when I thought about being a photographer for a living. I just felt like I wouldn’t fail at it. I mean I’ve definitely had failures throughout my career, but once I got my degree in 2002, I only made money as a photographer …  well, except that one time when I was an extra on House of Cards as a photographer. Also, holy smokes! I’ve been a photographer for 20 years! That sneaked up on me.

What are your favorite things to photograph?
You mean, besides the work that pays the best? Ha! Well, when people ask me what my favorite food is, I always say “macaroni and cheese.” But, there’s food I like waaaaayyyy more than mac n’ cheese. But, it was my favorite as a kid, I still love it, and there are so many fun ways to make it. So, in a similar way, I’ve photographed a ton of different subject matter. I thoroughly enjoy most of it. But I think portrait work is my favorite. I do editorial and commercial work, and there’s always a story attached to those portraits. Some photographers are very good at controlling everything during a shoot and executing a pre-planned vision. I’m the opposite. I love to collaborate and improvise with my subjects. I think it helps that I like people too. They tend to enjoy the process when they realize I’m enjoying their company.

What is the one thing you wish you knew when you started taking photos?
Better business practices.

In your opinion, what makes a good photograph?
If it makes me feel something.

What are your top five tips for taking a good photograph?


What are the top things to avoid when taking a photo?
What is the best way to capture candid/action shots?
Like I said earlier, find a clean background and wait for something cool to happen. Also, shoot the emotion. Photography speaks in nonverbal communication. Watch for body posture and facial expressions. What are they communicating? Are they happy? Nervous? Bored? Bummed?

What is the best way to take a group photo?
Oh man. The best way? I think tableaus are the ULTIMATE group photo. What’s a tableau? It’s a narrative picture with several subjects helping tell that narrative. Ever see a Where’s Waldo? You have to look for Waldo in a sea of other people doing other things. Waldo is surrounded by tiny narratives. That’s an extreme version of a tableau, but I hope you get the idea. But if you want tips on making a better family photo — aside from putting them in front of a clean, simple background — allow their personalities to come out, especially the kids. Let the 8-year-old make a ridiculous face. Let the 15-year-old roll their eyes. Their personalities will change every year. I know a lot of you might want that perfect everyone’s-smiling-photo, and try to get that, but then see what happens when you let everyone pose how they want. After 10 years, it’ll be a really interesting study of your family.

What is the best way to hold a camera to avoid camera shake?
Tuck your elbows into your torso, and, when you’re holding your camera, cup your left hand UNDER the lens. I see so many people putting their left hand on top of their lens, which does nothing to support your camera.

What is the best advice you’ve received as a photographer?
Don’t be afraid to hold a camera. They’re meant to be held. 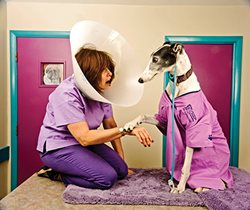 Out of all your photos, which one is your favorite? Why?
This is kind of like my mac n’ cheese answer. There are a lot of photos I’ve made that I love. But one sticks out. It’s the photo that went along with Howard Magazine’s Best Vet of Howard County award. It’s a ludicrous picture that borders on schlock. but what makes it work is the vet’s connection and interaction with the dog. That’s the emotional glue that elevates this silly role reversal theme to, what I think, and most people also seem to think, is a really great picture. There’s an emphasis in the photo world for young photographers to develop their “eye.” It’s a photographer’s distinctive style, and this photo became my guide stone for the most distinct style I show in my portfolio.